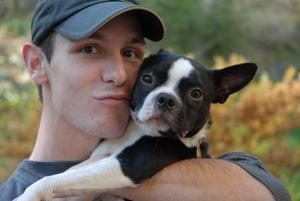 Adam with studio buddy Cyrus
Adam`s entry into the arts began when he picked up the guitar. At the young
age of 4, he showed exceptional talent and was asked to make guest
appearances with two local bands. He had developed quite a following and
amazed the crowd. During a family cruise trip to the Caribbean, Adam was
asked to join the band on board the cruise ship.

Although he enjoyed playing in the bands, his guitar gave way to the paint
brush when he was 6. He started to dabble a bit with pencil drawing bears,
wolves, and waterfowl. Fascinated by his father`s early career in duck
stamps, Adam decided he wanted to learn how to paint and subsequently entered
the Montana Junior Duck Stamp competition. His first entry in 200 placed
first and that was the beginning and the end of his duck stamp career. He put
away his paint brushes and turned his full attention to cars. – Adam Smith – – Adam and Cyrus